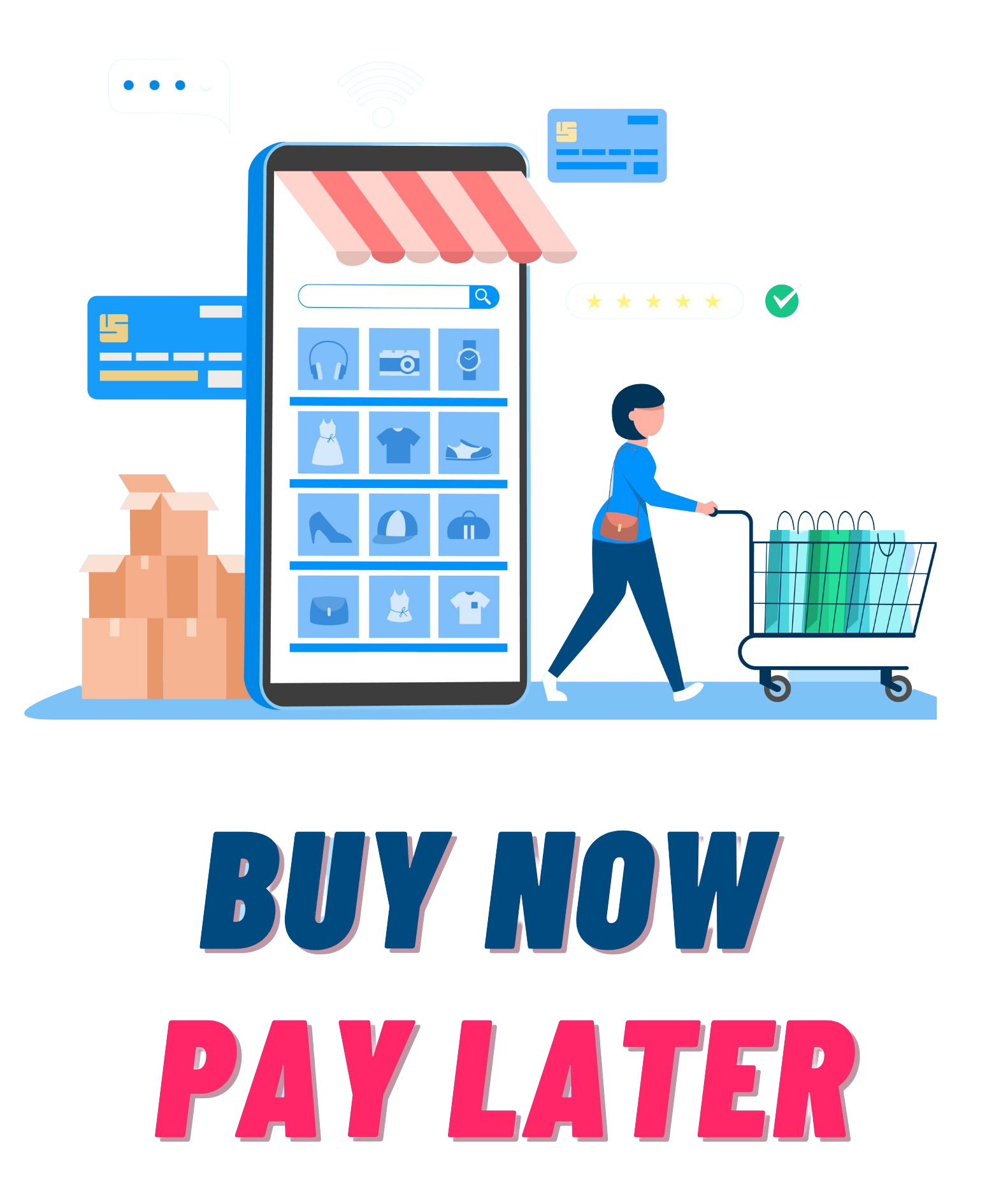 Every now and then, a new product fad comes around, becomes the talk of the town and claims to make certain banking products redundant.

Wallets were supposed to replace credit cards 5-7 years ago. Where are those wallets now?

Whenever a new fad has claimed to make the banks redundant, almost always the banks have gone back laughing their way to, well, the banks!

P2P lending was supposed to wipe out institutional lending. LendingClub - which went public in 2014 - has lost nearly 90% of its value since then.`

Would BNPL (buy now-pay later) fare any differently? Lately, it has garnered a lot of media coverage and claims of it replacing credit cards have been going around! But is BNPL really a new product? 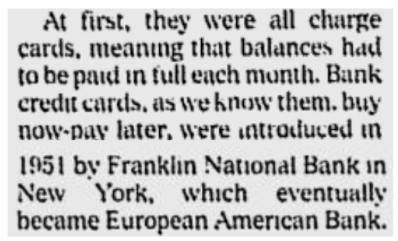 This newspaper article from 2000 tells us that credit cards are the OG of BNPL!

And how is BNPL any different from the POS financing provided by the likes of Bajaj Finance in India and various retailers in the US for decades? In fact even credit cards support POS integrations and interest free EMIs (at least in India), similar to what BNPL claims to do. So what makes BNPL so interesting and why are they gaining popularity now?

The answer lies in the target demographics and ownership of risk.

How BNPL stacks against Credit Cards

Let’s look at a few key differences between today’s BNPL and the original BNPL (Credit cards), 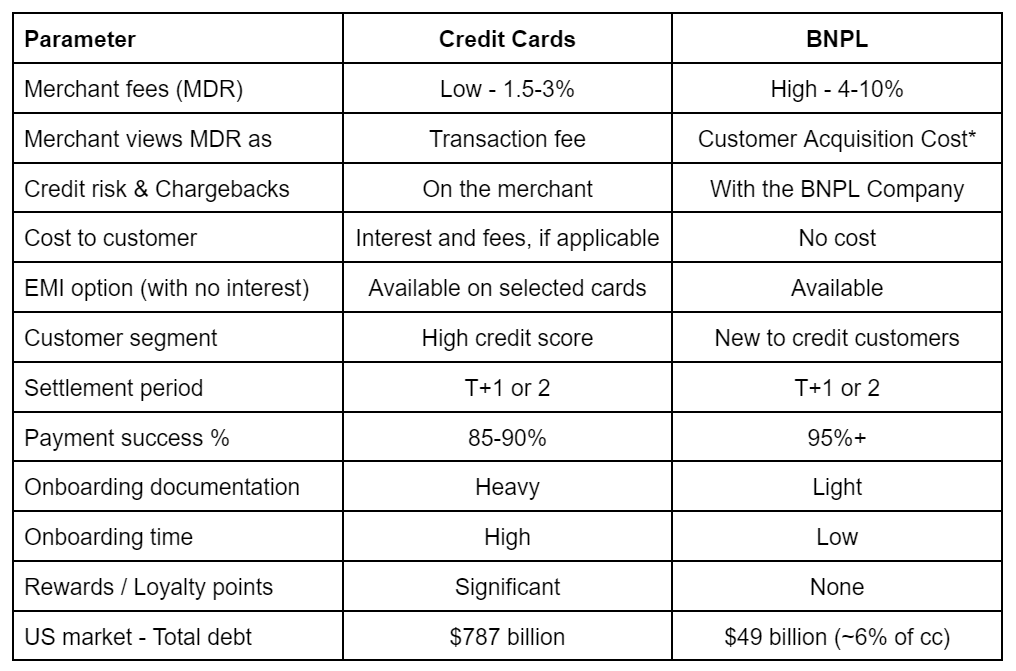 BNPL is clearly a riskier product than credit cards. They lend to new-to-credit customers, that too at no cost to them, and take ownership of the credit risk & chargebacks. To cover this risk they charge a much higher MDR.

While the risk is higher for BNPL, for the customers these firms have provided a much smoother customer experience and have certainly made things much more transparent than credit cards, which are riddled with hidden fees, poorly understood compounding interest and various penalties. That’s a definite improvement over credit cards.

But the two propositions, at least from a customer’s viewpoint and in markets with good credit card penetration, aren’t too different from each other. While in markets with low credit card penetration, BNPL can definitely make a dent as a large percentage of the population is not exposed to credit products, while onboarding on BNPL is much easier.

On the merchant side, operationally BNPL and credit cards are nearly the same. Where they differ is on the charges and ownership of risk. Once the merchant has sold the product, they are assured of the payment, irrespective of the customer defaulting on their payments to the BNPL provider.

Overall the key difference between both the products is the customer segment they are going after. Credit cards are generally issued to customers who have a proven credit history, while BNPL is primarily being adopted by customers who are new to credit and don’t have a credit history. And this is where the risk lies for the BNPL product as well as the industry.

Few highlights from The Ascent survey done on BNPL in March 2021, 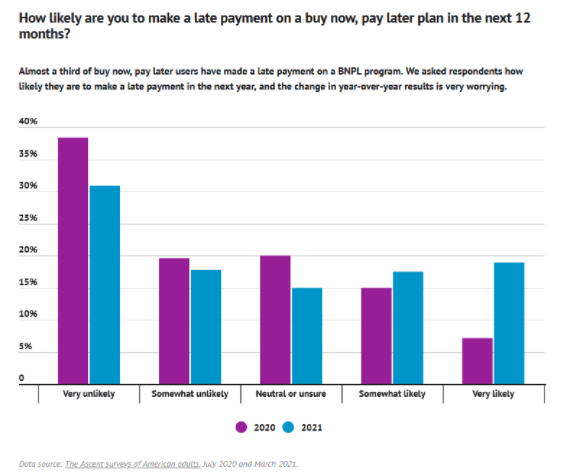 Today a lot of FinTechs are only valuation focused and are driven by VC funds, which has led to these firms focusing on quantitative vanity metrics like user growth, total book size, etc. while ignoring qualitative sanity metrics like NPAs, Cashflows, Profits, etc. If BNPL firms remain focused on customer growth numbers and not on their NPAs, it could lead to catastrophic outcomes. Instead of replacing credit cards, they run the risk of being wiped out themselves by a new product - BNDPL (buy-now-do-not-pay-later).

Being a part of the overall financial ecosystem, these players need to be responsible, take a long term view and help build the credit discipline in the system, so that this trend sustains and is not just a blip on the graph.

Given the growth it has seen over the last couple of years, BNPL can definitely provide a credible competition to credit cards. But will it replace credit cards anytime soon? Seems unlikely as the customer segment is very different.

On the other hand, Banks definitely need to learn a thing or two from these firms and upgrade the customer experience for their credit card customers.