It has been a while now for me exploring flutter, such that it suits best to Nuclei’s mobile development requirements and technology stack. Having said that, one of the most important aspect was to figure out dart’s support for gRPC and protocol buffers. But finally, after pretty much efforts I have been able to integrate gRPC with flutter on top of a service in goLang.

Thanks to the very sporty and widely growing Flutter community. Cheers!

The roadblocks and challenges that I came across, have driven me to assemble all the bits and pieces at one place and write this article, such that it helps all the beginners who want an easy way out through Flutter with gRPC.

Let’s begin with setting up gRPC for our GO server

As it is quite evident from the proto that the service takes two numbers a and b as a Request and returns the sum of both as result in form of Response.! 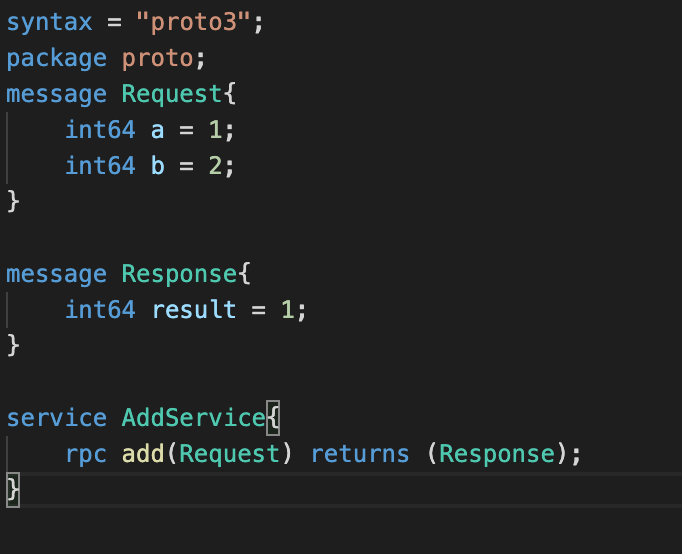 In order to generate a corresponding go file for our proto file, we need access to all include files that comes when we download the protoc compiler.

Locate the unzipped protoc directory in your system, and locate the directory include with the absolute path protoc/include. Refer: Fig 2

Copy the whole directory google along with all the files, under include, and paste it in a directory inside your go workspace, for easy accessibility. Refer: Fig 3 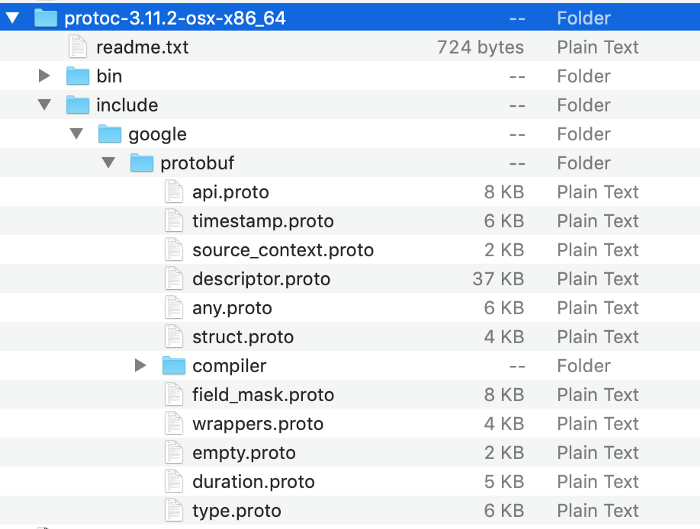 Just one step away from writing our service in go. Yeah!

Type the following command on your terminal:

KaBoom!! You’ll find your server.pb.go file under proto directory that does all the magic. (Refer Fig 3) 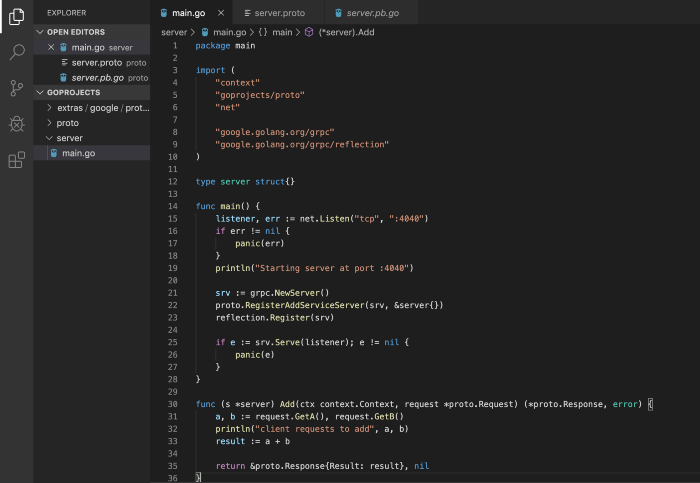 Now our server is ready to serve our flutter client, with its simple Add service.

Before setting up gRPC for dart please ensure that:

Refer the links to do the same if not already done https://appitventures.com/blog/how-to-setup-flutter-on-android-studio/

Before we get into coding our flutter app, lets get the protoc plugin activated for dart which will generate dart based class files corresponding to our server.proto file, using a simple command on your terminal:

The compiler plugin, protoc-gen-dart, is installed in $HOME/.pub-cache/bin. It must be in your $PATH for the protocol compiler, protoc, to find it.

Note: pub command won’t be recognised as a command until you install dart

Time to create a Flutter project in Android Studio

This will generate a main.dart file under lib directory by default. (I have just edited the same file in order to call the service for a while) 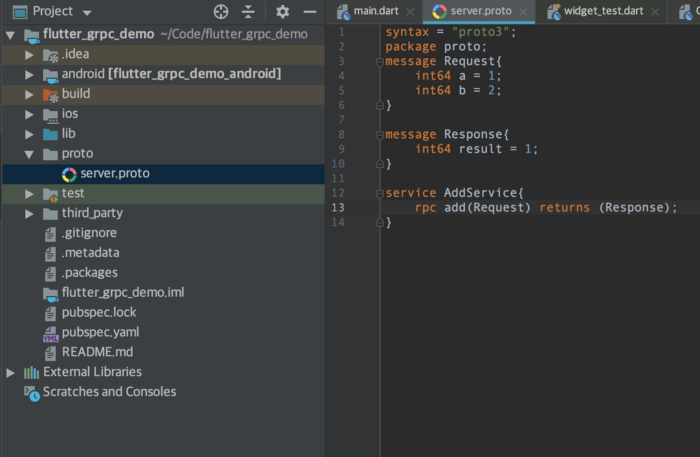 Just type the following command in your terminal to find your four magic dart files, which exposes the server’s addService to the client(Refer Fig 6):

The command declares a path for our proto file server.proto and ask dart to output the class files in lib/service directory.

Almost Done! Let’s write a client and a method to bind onto add service

I have created a class MathService in math_service.dart file (Refer Fig 6 and Fig 7) and defined an async add method which will be exposed to our flutter application in order to receive two numbers as input on user’s action, and will await the server response and return the same after every call.

The following is a simple gRPC client, that has a channel set up for our server listening at port 4040.

After a bit of editing for the purpose of adding our service request our main.dart file looks like this: 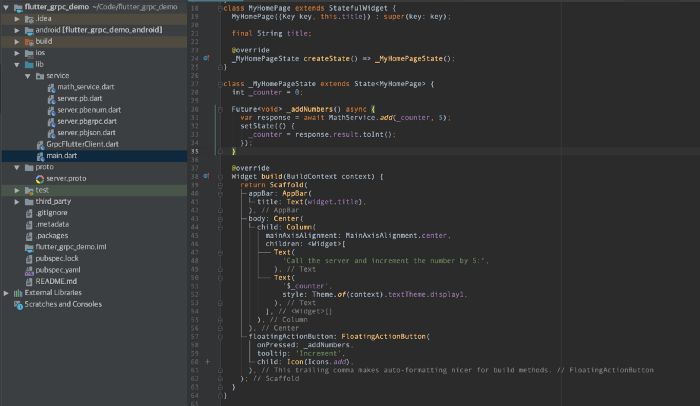 The addNumbers method is an async method that is called whenever the user taps the floating action button, and increments the number on screen by 5. The counter keeps on updating as and when we receive response after addition operation from the server.

Once we run the app, the app looks like the following by default: 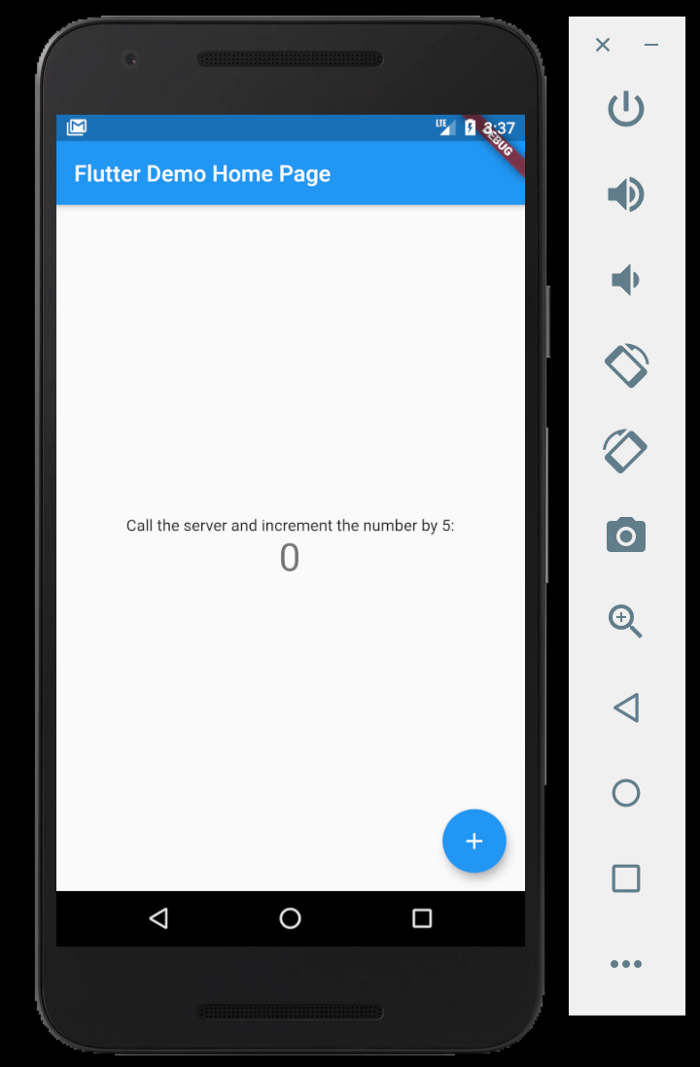 Let’s start our server with the following command in order to respond when user taps on the button:

Now tap on the button and get the number on the screen incremented by 5, every time you tap the button. Following is a small demonstration of our client and server in action:

I hope the above work makes it easy for us to start right away with flutter and gRPC together.

Please support by applauding and sharing if you found it helpful. Looking forward to writing more on similar topics and explorations.